Do you dream of acquiring the pair of “Blue the Great” sneakers from Nike? Trust Sold Out to pre-book it and buy it as soon as it is released! In any case, this is what Jean-Maxime Guédel (PGE 2015) will offer to sneaker enthusiasts. “At the moment, I am in the first phase of the project. I make tips available to fans with links to reserve limited edition sneakers as well as an estimate of the possible resale price. My team and I are currently working on phase two of development, which is where Sold Out can pre-book and purchase the pair directly on behalf of the customer. “A development that is technically cutting-edge. “A lot of resellers use a bot to pre-book and buy all the available pairs at a reduced price in order to resell them much more. This system prevents enthusiasts of modest means from buying the pair of sneakers of their dreams. The goal of Sold Out is to break this elitist system. »Jean-Maxime is currently recruiting a CTO (Chief Technical Officer) to carry out this phase 2 and to offer a full service from January 2021.

But where did this idea come from? To do this, you have to go back a few years in time… 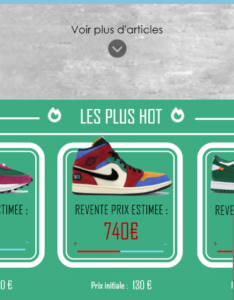 Remember, it was 2014, the whole world was swinging their hips listening to “Waka waka hey hey”, and all eyes were on Brazil where the 20th edition of the FIFA World Cup was being played. It is in this euphoric context that Jean-Maxime Guédel chose to carry out his academic exchange in Brazil. A few months before the start of the festivities, Jean-Maxime is looking for tickets, but it’s a cold shower. It will not take him less than three days of research on the internet to understand where he can buy his tickets. An aberration that many enthusiasts have experienced. This is when the concept of Sold Out was born. Jean-Maxime had identified a clear need: to be able to easily reserve a limited edition product before its release. After studying the market, it turned out that sneakers had the highest resale rate among limited products. He began working on this project during his exchange, then presented himself at the entrance to the Incubators on his return to France with the project “Comme des petits pains”. As the project lacks a proof of concept (POC) in order to demonstrate its real potential, the members of the selection committee advise it first of all to deepen its study before presenting itself again. Jean-Maxime then puts this project in the back of his mind, without abandoning it completely, but without however being able to fully invest in it because who says young graduate, also says non-existent salary.

This financial need pushes him to work in a large group. He became Junior Product Manager at Orange where he was in charge of the development of the parental control application “My Livebox”. “I headed for a Product Manager position because for me, it is the salaried position that most closely resembles an entrepreneur. He then moved on to a second position as Tech Product Manager at Logicom, then became an independent consultant for a year and a half. At the end of the consulting mission, he must make a choice: accept a great opportunity in a large Parisian web agency, or create his own business. Jean-Maxime chooses the second option. “My previous experiences in large companies and as a consultant had allowed me to save money, at least enough to have the time to develop the project that was close to my heart since 2014. So I decided to says: you might as well have a little fun! ”

Because entrepreneurship for him is a real hobby. From the age of thirteen, Jean-Maxime was already pitching business creation ideas at the table in front of his parents and siblings. “I think unlike the rest of my siblings, entrepreneurship has always been a part of me. My mother, herself a liberal nurse, encouraged me a lot. ” 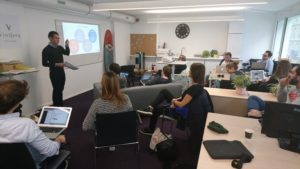 Jean-Maxime appeared before the NEOMA Incubator selection committee again in March 2019 and his renamed “Sold Out” project was accepted. “I focused on sneakers for market reasons but also by choice because I myself have been a sneaker enthusiast since my teenage years. “He is delighted to leave his world of solitary consultant to join a lively and motivating structure:” It was important for me to take the road to a fixed office every morning, to find the other founders who then became my friends. , to be able to discuss my issues with people who shared my passion for entrepreneurship. The startups and business experts I met there provided me with immediate answers and helped me resolve practical questions, while the coaching provided directly by the Incubator allowed me to gain height and clarify the vision of the company. The network of Incubators has clearly played a leading role in the development of Sold Out. ”

Jean-Maxime qualifies the other incubated founders as “marathon companions” because yes, entrepreneurship is fascinating and brings great freedom of action, but it also represents a challenge. “The entrepreneur carries heavy responsibilities on his shoulders. He thinks about his business 24 hours a day, day and night, weekends and holidays. Starting a business offers no respite. “However, Jean-Maxime would not change status for the world. “Every day I have the chance to make my own dreams come true and not those of others. I have the opportunity to assemble a team of my choice, to surround myself with people who are stronger than me in their fields while instilling in them my vision for the company. It’s very rewarding. What I love most is when a member of my team puts their heart into a topic. ”

This managerial role, Jean-Maxime understands its full scope since the first confinement in May 2020. “The deterioration of the global health situation has a direct impact on the team. With each confinement, I must both follow everyone’s actions as usual, but also take care of their morale and make sure that everyone stays motivated, even from a distance. This requires special attention from me. ”

Drawing on his experience, Jean-Maxime is now in a position to advise young people who wish to embark on business creation. “First of all, the creator must be convinced of the potential of his project and be able to explain through A plus B why his project will be successful. It is the keystone that turns a simple idea into a real life project. Then, it is always good to confront the opinions of others, which is why you should start by testing your market with those close to you. By recording all the results in writing, it helps to prove the potential of your project, especially to members of a selection committee. Finally, I advise everyone to surround themselves well throughout the development phase. A structure like the NEOMA Incubators allows you to get on the right track right away, to meet the right people to challenge yourself and develop your idea into a full-fledged company. ”

Do you want to become a Sold Out beta tester? Register by clicking here.

Pimp My Sound: more than a business, a love story of music!