Do you know Citizens? This citizen platform is the link between local associations and businesses in order to facilitate and promote citizen engagement, in particular through skills sponsorship.

At the origin, it is a story of cracking. A crack in life, in everyday life, in Pierre Paillereau’s (PGE 19) vision of the world following a death in his family. Since everything is reset when you lose a loved one, since nothing makes sense anymore, he took it into his head to look for them. Pierre decides to do a first internship in an international NGO in Paris. He found some meaning because the NGO in question advocates the education of children around the world. But his experience left him with a mixed impression: “In the end, I found in this NGO the same functioning as in a large company. I worked for people I didn’t see, whom I had never met, with whom I had no contact. I lacked the experience and the reality on the ground. This is why, in the process, Pierre engages in civic service at the heart of an association of modest size, still in the field of education. “This time around I really enjoyed it. I was in direct contact with the teachers and parents of students, I identified their needs, I put in place action plans to best meet their expectations, it was much more concrete. ”

On the strength of his experiences, Pierre decided to create a blog to highlight the players involved in solidarity, ecological and responsible initiatives. With the help of Ludovic Payen (PGE19), also a student at NEOMA, they go to meet inspiring citizens and thus write about twenty portraits (photos and videos). Their blog becomes an association, “Citizens Portraits”. But they don’t want to stop there. Taking advantage of their gap year, they decide to embark on a world tour of citizen initiatives. They raised the necessary funds for this project by reaching the final of the Carrefour Foundation competition in 2017 (5,000 euros). At the same time, they put their first foot in the world of professional journalism by reaching the final of the “Young Reporters of Hope” award from the Reporters d’Espoirs Foundation, which gave them great notoriety. 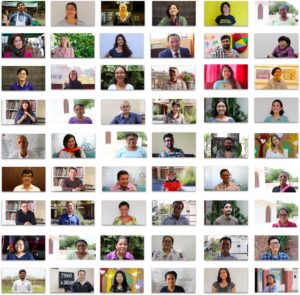 The Grand Départ is announced for 2018. For nine months, they travel through Argentina, Chile, Bolivia, Peru, Australia, India, Nepal, Thailand, Vietnam and Burma. There, they meet the founders of associations, charities, and citizens committed to causes that are all more useful than the others, and thus write about 60 additional portraits on their blog. “This journey has been of exceptional human richness for me,” recalls Pierre. “All these encounters stood out for me, but if I had to name just one, it would certainly be our visit to the NGO Barefoot College in Tilonia, India. We were welcomed by families on site for a total immersion in their daily life. In particular, the organization has a training program for solar engineers. They select women, often elderly and illiterate, from small underprivileged villages all over the world in order to train them on site for six months. When they return home, they are able to deploy solar panels to make their village more energy self-sufficient. I really liked this project because nothing is imposed. It is not a question of arriving on site with a ready-made solution for the locals, but rather of offering them to develop skills in an area that is useful for their entire community. I really like this approach of starting from the concrete needs of the field, and this is what I want to put in place with Citizens. ”

On his return to France, Pierre felt pumped up. “I had discovered so many positive initiatives, met so many committed citizens that I had to do something myself. While his friend Ludovic flies to new horizons, Pierre is looking for a business model that will allow him to live his passion while earning a living. He embarked on business creation.

“The blog was still there, but I wanted to go even further so that my actions have a real impact on society. So I got the idea of ​​a platform to facilitate the meeting between the needs of associations and business resources. My project is fully in line with the search for meaning currently experienced by a large majority of employees, and also allows companies to engage in a CSR policy with real impact. This is particularly a real asset for their brand image. ”

Since January 2020, Pierre has completed the courses at NEOMA and is fully involved in the creation of his business. In February, he joined the school’s Rouen Incubator. “For me, who tends to be scattered, supporting this kind of structure is very important. As an entrepreneur, my creativity is limitless! It can also be a disadvantage because I want to do everything at the same time. Meetings with my coach help me stay the course! I also have the chance to share an office with other passionate founders, who shed another light on my project, which is very motivating. ”

During the first seven months of development, Pierre embarked on recruiting partner associations, identifying their needs and the most appropriate way to meet their expectations. This is a long process because each situation is specific. Today, it has around fifty associations listed on its platform, which represents more than 300 missions for employee volunteers. “Associations have very specific needs. Some need the skills of an accountant, for example, or lack the time to enhance their actions through communication. Others are looking for funding … The missions are very varied! ” 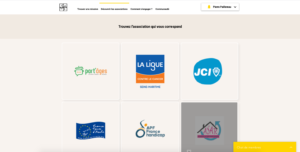 In parallel with the web development of his platform, Pierre is also embarking on the search for business partners in order to respond to all the requests identified. A task made even more difficult by the confinement: “I had several meetings with large national brands, but the health crisis naturally changed their priorities so the meetings were postponed until 2021.” Pierre does not let himself be defeated, however, and thus finalizes its first partnership agreements with two companies of 250 and 60 employees, in the fields of food industry and construction.

The official launch of the platform is scheduled for the 1st quarter of 2021!

Are you a business and are you interested in the Citizens solution? Do not hesitate to contact Pierre Paillereau: write to him!

Arterya, a revolution in the service of nursing staff