Who ever said that people from the North never venture outside? It certainly isn’t the founders of the Friche Gourmande Gourmet, who have found huge success with their convivial outdoor food space. 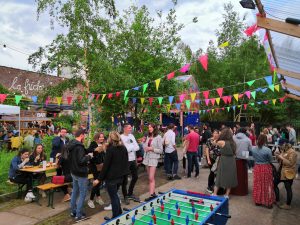 ​For the second year running, this open-air food space is proving to be a hit in Lille. Incubated since 2017, Philippe Blanchot and Guillaume Souloumiac (2017 Master in Management graduates) host more than 80 events and coordinate 8 mobile caterers every day between April 30 and September 30. With the help of 9 employees, almost 120,000 visitors at their 1200 m² terrace, including 65,000 in 2019, have been served.​

The idea came from the different experiences we had overseas in Lima, Mexico, London, Singapore… We would always come across these kinds of food spaces where we would always have a great time, so we had this dram of starting one in France. The choice of Lille was quite easy because this is where I’m from and because we found the location relatively quickly. Now we’re thinking of opening spaces in other cities like Toulouse, where Guillaume is from.” explains Philippe. 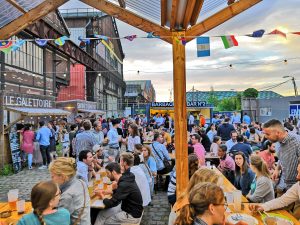 Conviviality is the key concept for La Friche Gourmande: concerts, street food, Molkky and table football tournaments, sales of second-hand clothes and plants… a huge programme that has just brought the 2019 season to a close. Philippe and Guillaume will be making the most of the winter break to come up with a host of new entertaining ideas for 2020!​

DREAM ACT PRO WANTS TO DO AWAY WITH DISPOSABLE GOODIES MANUFACTURED IN FARAWAY PLACES!