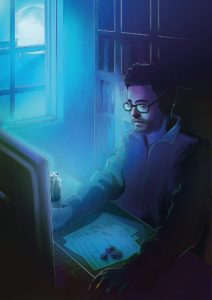 Originally there was a name. Firmuyn. But for Louis Bled (PGE 21), then 11 years old, it is more than just a name, it is above all the first universe of medieval fantasy to emerge from his imagination. Carried by monuments such as the Lord of the Rings or Dungeons and Dragons, Louis fully immerses himself in his Firmuyn universe, invents characters, a currency, countries, peoples, a whole epic that will mark him for life. At the time, he promised himself that if he ever managed to set up a role-playing business, it would be called Firmuyn! We are in 2021 and it is now done! Firmuyn Corp is a startup currently incubated at NEOMA and dedicated to publishing role-playing games in the form of books. It was during his teenage years that Louis discovered role-playing games, an approach that immediately appealed to him. “Unlike traditional reading, role-playing allows readers to experience the fantasy world as if it were their own. They play characters, feel their emotions, strategize according to this new environment that they have never seen. Role-playing turns a passionate reader into the main actor of his inner film, ”explains Louis.

Shortly after the launch of Firmuyn, it was Martin d’Abzac (PGE 21) ‘s turn to join the adventure, first as editor of their first universe Almenia, then finally as a partner. “I literally got caught up in the game! Martin laughs. “At first, I was just helping Louis put into words the world he imagined. Then, little by little, his world also became mine, so much so that I couldn’t see myself leaving the adventure at all! Finally, Almenia is a bit like my home! I felt so good there that I put my bags down! ” 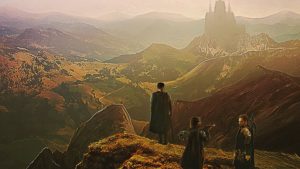 Almenia is the name of the first role-playing game that Firmuyn Corp wants to launch. To do this, Louis and Martin are launching an Ulule campaign to raise enough funds to bring their project to life and, above all, to share it with a whole community of passionate gamers. To encourage them, feel free to visit their campaign by clicking here.

Incubated in January 2021, Louis and Martin learned a lot within the school’s Incubators. “We are both creatives, but as such, we go all over the place,” admits Louis. “The Reims Incubator gave us structure in our procedures, as well as a great deal of advice that allowed us to avoid the traps of beginners. A way to reach our goals faster and in much better conditions than we had to do on our own. ”

A journey confirmed by Lucile Peuch, coach of the Incubator of Reims : “When they entered the incubator, they immediately announced the color to me: crowdfunding within two months, communication, the most extraordinary game releases. And the best part is that they do it with flying colors! These two amazing and unique associates are embarking on the path of entrepreneurship with great convictions for the world of role-playing games. It is a real pleasure for me to coach such motivated young people! “.

Their ambition in the long term? Be part of the Top 5 French role-playing game publishers by 2026. That’s all we want for them to!

"On this one, we clearly played our lives": a deal in times of covid

“Tech It Easy”: discover the new tech videos from the Incubators!