A TUESDAY in San Francisco: between Google and Stanford, our startuppers fine-tune their concepts!

The entrepreneurial trip to San Francisco continues for our nine incubated startups! Today, it’s Morgan Ammar, founder of the startup  Cassette, who accompanies us on their adventure with a visit to Google and Stanford!

“Second day, second round of pancakes. The jet lag is less noticeable and we take the highway towards Mountain View where Google’s headquarters are located. We find the gigantic campus, spread over more than one kilometre, part of which is still under construction. We are welcomed by Pauline Cristofari (2016 PGE graduate from NEOMA), who started her own adventure in San Francisco with Lenovo, before joining the American giant as a corporate investor. Pauline is part of a team of around thirty employees whose assignment is to identify potential startups for acquisition, for example Fitbit smart-watches recently bought by Google. 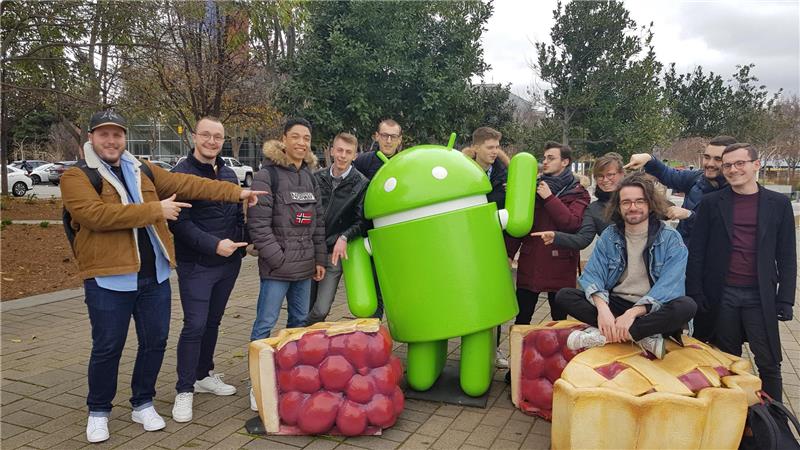 We learn a lot from the hour spent with Pauline. Google is divided into several divisions corresponding to their different products – Search, Ads among others, and now Healthcare. The company attained a payroll of 45,000 employees in San Francisco very quickly, and the competition is fierce with the other Internet majors such as Facebook and Amazon, in particular to recruit talent. To recruit and retain that talent, Google does not skimp on the means: a wide range of free food and drinks, gym or gaming rooms and repair of electronic equipment, free shuttles to reach downtown San Francisco and mini Uber to cross the campus … there’s no shortage of services!

Despite its size, Google manages to innovate and encourage communication between the teams of its different divisions. Pauline underlines that the strength of Google is to know its weaknesses and defects with regard to Amazon and Facebook: the company is aware that 80% of its revenues come from online advertising and that rapid and efficient diversification is vital. If the high-potential startups in which Google invests end up crashing, the company does everything it can to quickly understand the reasons for the failure. It is common to see teams present to the public the lessons learnt from their own product failures. The entrepreneurial culture around entrepreneurship is very strong and each experience is worth taking, whether it’s positive or negative.

For Lucile from the Nicomed startup, the fact that Google is launching a Health division and that the majors are doing the same in the same sectors proves that her market, that of health and medicine, is promising. For Dimitri and Vincent from Drive Eco’vrac, the trend towards a business model based on subscriptions (Google Stadia, Youtube Music) is what holds their attention. Is this a business model that would suit their bulk product drive system? Philémon (Barks), on the other hand, maintains that the example of Google proves that the product of a startup should never be considered “finished” – it will be vital for Barks to diversify and to think about other innovations, while keeping communication well oiled between the different teams of the same startup.

We have lunch at In-n-Out, a California chain of burgers, then head to one of the most beautiful of all universities, Stanford. Several faculties – medicine, business, humanities, etc. – are on the campus, between perfectly mown lawns and buildings of Hispanic design. 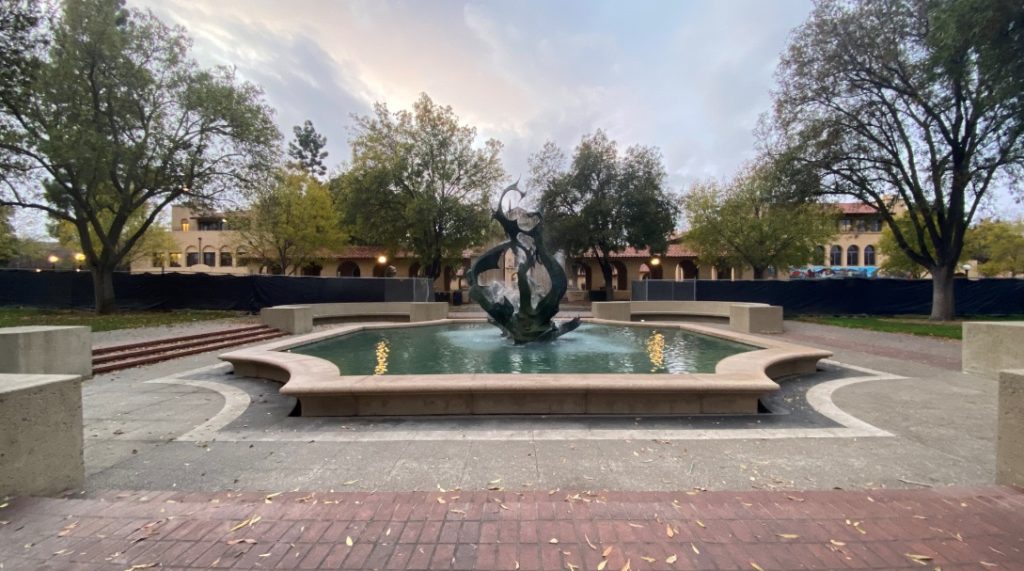 We meet Amanda Tiet, Community Coordinator of the Hasso Plattner Institute of Design (d.school), the Stanford department dedicated to design thinking. This innovation management method developed in the 1980s in the United States teaches how to generate ideas from scratch, as well as to rapidly prototype them in order to solve specific problems. In this building, students from all of the faculties come together to think, generate ideas and prototype them in the same stride. We visit a workshop and the tools allowing students to make their prototypes, for example chairs and benches entirely made of folded cardboard. In a room, students are busy on whiteboards and quickly write down their ideas for an upcoming study trip.

Victor (Pimpmysound) notes in particular the diversity of profiles present within the d.school, where students in sociology, mechanics and business come together to work on projects and follow the same common principles of design thinking.

Our visit to Stanford helps us partly understand the reasons why the Americans have taken up tech more quickly. Despite the tuition fees that seem exorbitant, the students seem to be in a position and to have all the tools they need to push back their limits and make their projects successful. The open education system provides students with the services they need so that they constantly improve in their learning. The watchword seems to be to imagine concepts and ideas and then bring them quickly to life, for example in the form of a startup. At Stanford, as at other American universities, the culture of action-based education seems strong, which develops all the more the feeling of belonging of the students, as evidenced by the gigantic store of Stanford by-products worn and used by most of the students we met.

We end our day with a visit to a Costco store. The chain of oversized hypermarkets provides wholesale products to individuals and professionals, who pay an annual subscription of between 60 and 150 dollars in order to do their shopping. The prices in the stores are much lower than in the “classic” stores and the shelves of products are stacked several meters high.

The visit intrigues Vincent and Dimitri (Drive Eco’vrac): the over-consumption model is the exact opposite of bulk consumption, which encourages the eco-responsible dynamic of “doing more with less”. However, the Costco subscription model is interesting because it is focused on low prices which have made it possible to democratize a new way of consuming. For Julian (PicMe), the subscription system which simply gives access to the stores helps create a strong community of customers.”

These are the ideas that one after the other shake our young business launchers’ minds as the day ends.

Don’t miss the next almost-live episode tomorrow of this entrepreneurial saga!

MONDAY in San Francisco: briefings and brainstorming, the watchwords of Silicon Valley

In Silicon Valley, everything changes at 1000 miles an hour and so do our startups!