A HELPING HAND FROM THE MUSKETEER BRAND!

The Coup de Pouce Competition was held on the Paris campus on Wednesday, November 6. The competition is backed by the Groupement des Mousquetaires foundation and contributes to the accelerated development of several NEOMA BS incubated start-ups. 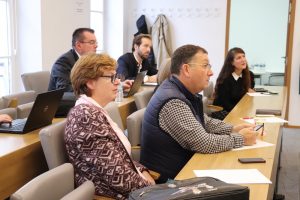 It is barely 9am on the Paris Campus and the jury members are aready set. They include several members of the ‘Fondation Mousquetaires’ – Serge Le Carre, Intermarché outlet manager in Plabenec (29) and Maryvonne Le Roch-Nocera,  Foundation treasurer and daughter of Jean-Pierre Le Roch, founding President of the Groupement des Mousquetaires.

“This is a Business Plan competition,” explains Nathalie Moock, the Foundation’s Executive Director and jury member. “It is aimed at start-up creators in their first stages of development and who need help in making a crucial step forward. The idea is to hold the competition in partnership with French Business Schools and their incubators who have the role of finding the young entrepreneurs of tomorrow! This is why NEOMA BS has been part of our Tour de France for several years now.”

Accompanying them are several newcomers, all ready to provide their expert opinion on the potential of the concepts presented: Denis Gallot, Director of the NEOMA BS Startup Lab, Stéphanie Chenavier, alumni member and marketing expert, and Pierre Dupond, alumni member and E-commerce specialist.

Full of the usual apprehension and stress that such big days bring, the Made in NEOMA BS start-up entrepreneurs take it in turn to pitch to the jury. One by one, they present their concept, their uniqueness and above all their potential for development on the market. Their goal is to win one of the three prizes on offer! One of the start-ups pitching this Wednesday is ‘BetOnYou’.“This competition is really important for us. It would really help us move towards a faster and stronger stage of development,” explain the start-up’s founders, Thomas Bourbon and Robin Du Fayet (PGE 2017). “Our mobile app is released today. It is the result of 7-months’ work! Winning one of the three prizes would help increase the number of users by boosting our communication strategy and, as a result, our visibility.”

In total, 8 start-ups are making a bid to win over the jury. Eight start-ups incubated by NEOMA BS, all involved in different activity sectors and at different stages of development. “We are aware of the potential impact of winning these prizes. Especially since the projects presented are of the highest quality and with interesting ideas that respond to real needs. To decide between them, our decisions are guided by their pertinence, development potential and how the prize money will be used. And we do not ignore how the team embodies the project, which is key to the project’s success.”

It the end of the proceedings, three start-ups were awarded prizes:

” This Coup de Pouce first prize is a unique opportunity for PicMe,” explain Martin, Julian and Gabriel, who created their start-up just three months ago. “This prize will allow us to develop our mobile application and be up and running very soon at 12 tourist sites in Paris!”