You know the Unicorns in the world of startups? You know, those companies valued at over a billion dollars! ManoMano, Blablacar, Vestiaire Collective, VeePee, Doctolib, Back Market… French unicorns are now well known to the general public! With the PonyCorn Show, it’s time to demystify all these great successes because, after all, every Unicorn was first… a PonyCorn 😉

Want to put yourself in the shoes of an entrepreneur but you have no idea? Join one of the projects selected by the coaches at the start of the day and put your energy to work to make it THE next PonyCorn!
Do you already have a project that you would like to challenge and improve? Come pitch blindly and be convincing! If the coaches turn around during your show, your project is selected and other entrepreneurial enthusiasts will join your team! 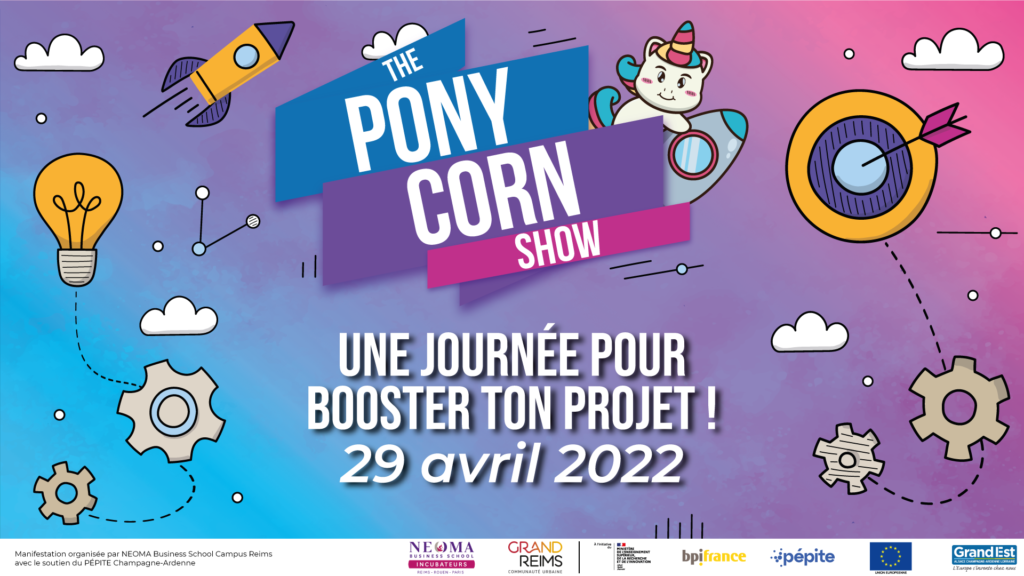 Be careful, as in any business creation, there will be pitfalls!!

Throughout the day, “rainbow” cards will be distributed to you. Should you integrate the “0 waste” principle into your production line? Or make sure your communication is inclusive? How will you transform your company in a full-digital era? As you progress with your team in the development of your project, concrete and real problems will be imposed on you with these Rainbow cards. As in real life, it’s up to you to adapt and anticipate!

The PÉPITE Champagne-Ardenne, whose operational management is provided by the URCA on behalf of the partners, benefits from funding from the GRAND EST region and from public and private partners.
PÉPITE CA is notably co-financed by the European Union. Europe is committed to the GRAND EST region with the European Regional Development Fund.
Student entrepreneurship news:potential-ca.fr – pepite-champagne-ardenne.fr
Follow us on twitter: www.twitter.com/potential_ca/
Join the community of enterprising students: www.facebook.com/potentielca/ – https://www.facebook.com/pepiteca

NEOMA BS Incubators, a support structure for business creation from NEOMA Business School present on its three Reims-Paris-Rouen campuses. Created in 2011, the Incubators support around a hundred entrepreneurs each year, from the idea to the creation of the company and the first fundraising thanks to a portfolio of varied and relevant services.
For more information: https://startuplab.neoma-bs.fr/fr/
Follow us on LinkedIn: https://www.linkedin.com/company/69236466/

100 startups to invest in by Challenges: 2 NEOMA startups not to be missed!